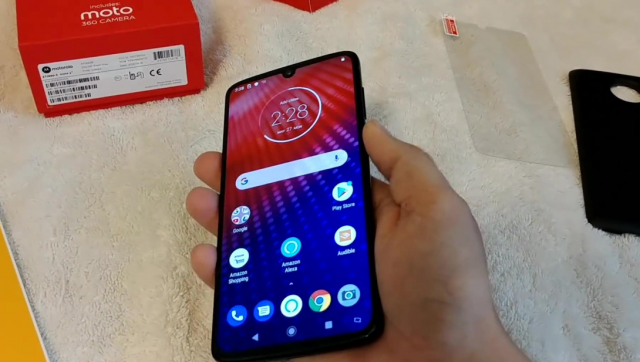 Even though Motorola has yet to announce the official launch date for its next-gen Moto Z4, we think it’s safe to say that the launch event is just around the corner. The reason why we are saying this is because Moto Z4 has been listed on Amazon as available for purchase for a short period of time until Motorola heard of this and asked Amazon to delete the listing. This confirms to us that Moto Z4 is going to launch during the upcoming days. One customer who spotted the listing moved quickly and ordered the smartphone and he made an unboxing video which you can watch below.

According to the Amazon listing, Moto Z4 will ship with a 6.4-inches OLED FullVision display that features a pixel resolution of 2,340 x 1,080. To make things even better, the smartphone is going to feature an in-display fingerprint sensor. This is a feature that only the most powerful smartphones have to offer and it shows to us that Moto Z4 will hold the title of being Motorola’s flagship in 2019-2020.

When it comes to hardware power, Moto Z4 is fueled by Qualcomm’s octa-core Snapdragon 675 CPU which is paired with 4GB of RAM and 128GB of internal storage space which can be expanded via a microSD card.

Motorola’s smartphones are renowned for their powerful camera specs and Moto Z4 is not an exception to that rule. Moto Z4 is going to feature a 48MP primary sensor with a 12MP output using Quad Pixel technology. In addition, the front camera features 25Mp which makes Moto Z4 the ideal device for people who love to take selfies. Last but not least, Moto Z4 is going to be priced at $499.99.