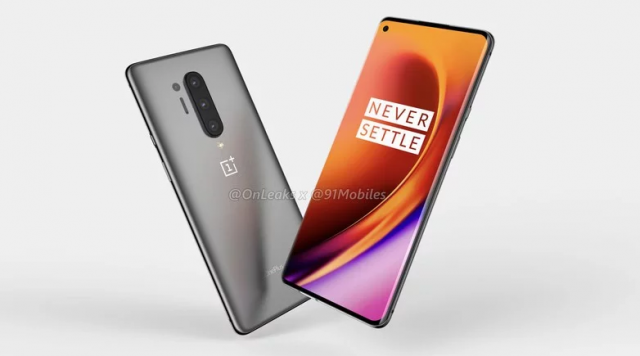 OnePlus 8 Pro is one of 2020’s most highly anticipated smartphones and therefore, it shouldn’t come as a surprise that tech leaksters have made it their top priority to find all information about the smartphone. Even though the official launch date for OnePlus 8 Pro is scheduled to take place on April 14, we got lucky and the folks at TechRadar have managed to get their hands on a significant leak. The leak sheds some light on what kind of hardware performances we can expect from the upcoming flagship smartphone.

According to the leak, the standard OnePlus 8 and the premium 8 Pro models will be equipped with AMOLED displays that feature a refresh rate of 120Hz. This is great news for OnePlus fans who enjoy mobile gaming because the increased refresh rate is going to provide a more immersive gameplay experience and make it easier for them to spot enemies in games such as PUBG Mobile and Fortnite.

Talking about mobile gaming, we want to highlight the fact that OnePlus 8 and OnePlus 8 Pro will be powered by Qualcomm’s Snapdragon 865. This is an octa-core processor that delivers outstanding performances.

The most impressive feature that was revealed by this leak shows that the upcoming OnePlus 8 and OnePlus 8 Pro will both support 30W reverse wireless charging. This is innovative technology will definitely give the two smartphones the upper hand over other flagship devices from companies such as Samsung and Apple.

As if the leak wasn’t impressive enough, it also confirmed that an affordable version of OnePlus 8 will launch in 2020. The budget-oriented smartphone is called OnePlus 8 Lite and according to the leak, it will be priced at around £400 in the UK. However, we don’t know if OnePlus 8 Lite will be 5G-enabled.