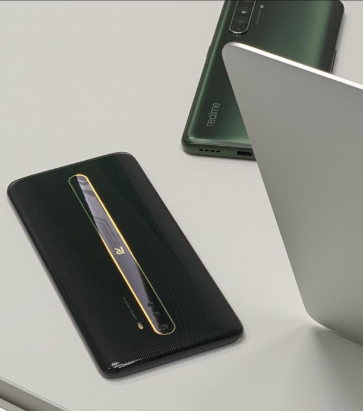 Even though the world is currently on lockdown, this doesn’t mean that smartphone companies are forgetting about their fans and that they are no longer working on upcoming products. The perfect example of this is Realme and the reason why we are saying that is because the press renders of the company’s next-gen flagship that is called “X3 SuperZoom” have just been leaked.

As we can see in the leaked press renders (featured above), Realme X3 SuperZoom sports an innovative design that is going to help the smartphone stand out when compared to other flagship devices. Realme X3 SuperZoom is quipped with a triple-camera setup on the rear side that is also accompanied by a LED flash.

According to previous leaks and rumors, Realme X3 SuperZoom is going to ship with a full-screen display that measures in at 6.44-inches. The display offers a screen-to-body ratio of 84.9 and it uses Super AMOLED technology to provide a pixel resolution of 1080 x 2400. In addition, the display has been coated in Corning Gorilla Glass 5 for extra protection.

Considering the fact that Realme X3 SuperZoom is going to hold the title of being a flagship smartphone, then it shouldn’t come as a surprise to find out that it is powered by Qualcomm’s Snapdragon 865 CPU.

This is an octa-core CPU that runs at a base speed of 1.8GHz and clocks at 2.84GHz. The CPU is super impressive and to make things even better, it ships with a modem that supports 5G connectivity.

WE also want to highlight that Realme X3 SuperZoom’s CPU is paired with an Adreno 650 graphics processing unit and 6GB/8GB/12GB of RAM. Not just that, but the smartphone offers 128GB/256GB of internal storage space.