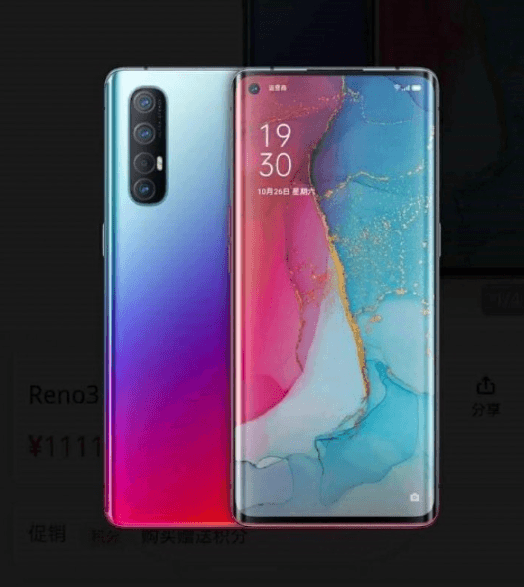 This month is going to be a great one for Oppo fans! The Chinese based tech giant is scheduled to launch Reno 3 and Reno 3 Pro later this month. These are two of the most highly anticipated smartphones of the year, and this all thanks to the fact that they are equipped with the best hardware parts available on the market.

For example, Reno 3 will be powered by an octa-core processor that is paired with 8GB of RAM. Nonetheless, the reason why we are talking about Oppo’s upcoming smartphones today is because the official press render of Reno 3 Pro has just been leaked.

Reno 3 Pro will hold the title of being Oppo’s flagship smartphone for the months to come and the leaked press render is showing us that the smartphone is more than eligible for the flagship title. As we can see in the picture featured above, Reno 3 Pro will ship with a full-screen display that features almost non-existed bezels. In addition, the selfie shooter is embedded beneath the display.

One of the most impressive specs that Reno 3 Pro has to offer is the four-camera setup that is mounted on the rear side. This is proof to us that smartphones are becoming more camera-centric every year and also that Oppo has equipped the new flagship smartphone with the best hardware parts that it could get its hands on. Talking about hardware, let’s check out what are Reno 3 Pro’s internals.

First of all, Reno 3 Pro will support 5G connectivity. The smartphone is going to be powered by Qualcomm’s octa-core Snapdragon 765 SoC that is fueled by a 4,025 mAh battery that can last for days on end. To top it all off, Reno 3 Pro will weigh in at less than 180 grams.