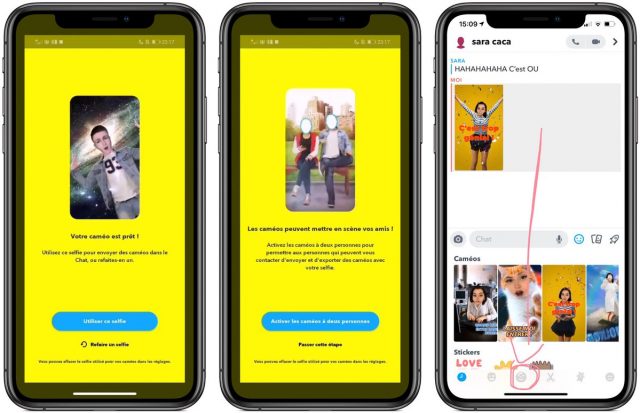 As many of you know already by now, Snapchat is the only social media app not-owned by Mark Zuckerberg that is posing a threat to Facebook and Instagram. The reason behind this is that the founders of Snapchat are not willing to sell the app and not only that, but Snapchat’s developers are constantly releasing new updates that are innovating the app’s features and boosting its software performances. In fact, a new update that brings a new style of camera lens is scheduled to roll out soon.

Snapchat stands out when compared to all the other social media apps by providing users with access to a plethora of camera lenses. Since the lenses are Snapchat’s best feature, then it should come as no surprise that the developers are now working on a brand-new one. The new lens is making it possible for users to place their faces over GIFs.

The new feature is dubbed as Cameo and it is currently in the testing phase. Snapchat has confirmed to the folks at TechCrunch that the which makes GIFs interactive is now being tested and that it will roll out soon enough.

The way that the new feature works is that it gives users the option to select one of their selfies, then pick a generic body type and their face will then be automatically animated in GIFs.

The animation also includes mouth movements. According to Snapchat, the new feature is going to start rolling out in France during the upcoming days and if the testing phase goes well, Cameo will be made available to users from all over the world.

We have to give praise to Snapchat’s developers for always coming up with innovative features. There is nothing like Cameo available for social media apps right now and we can be sure that Snapchat’s users are going to have a blast with it.