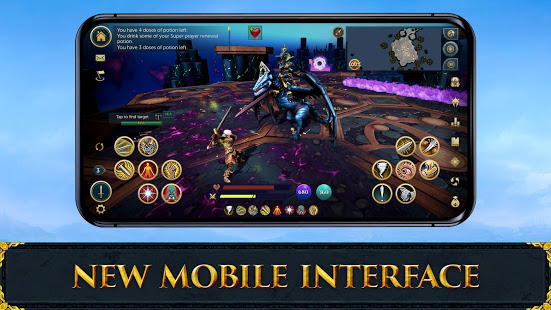 What better way to kick off the day other than with a new update for your favorite mobile game? With that said, RuneScape Mobile fans should make sure to keep their smartphones connected to a stable Wi-Fi network because a new update is coming their way. The update sports the 912.4.4.1 build number and it is available for the Early Access version of the game.

As previously noted, the latest update for RuneScape Mobile is available to download via OTA (over the air) channels. The only requirement to access the update is to be enrolled in the Early Access version of the game.

There is an alternative way to download the update and all the improvements that it brings. The update is also available to manually download and install in the form of APK. The acronym stands for “Android Package Kit” and therefore, this type of update is compatible only with Android-powered smartphones.

According to the patch notes listed by the developers, they have listened to the feedback from users and are focusing on improving the overall software performances on mobile. The way that the update does that is by introducing additional bug fixes and software tweaks.

Here are the mobile game’s key features as presented by the developers on the official website.

DESIGNED FOR MOBILE
It’s the entire world of Gielinor that you know and love but with a brand new mobile-friendly smartphone UI.

RUNESCAPE – AN MMO 19 YEARS IN THE MAKING!
With a world that’s been growing for an incredible 19 years, RuneScape continues to thrill players with an adventure unlike any other. With 270 million installations across PC and mobile, join the hundreds of millions of people who have explored the fantastic and mystical world of Gielinor.

CHOOSE YOUR OWN PATH
Will you explore the world with friends or seek your fame and fortune as a lone adventurer? Whether you’re engaged in daring quests, quietly tending to your farm, risking it all against a high-level boss or spending a night at the circus, RuneScape is the perfect second-screen game. Play how you want – the choice is yours. What type of hero will you be?

UNFORGETTABLE ENCOUNTERS
Make friends – and maybe sometimes enemies – with a rich roster of memorable NPC characters. From lovable companions and friendly rogues, to deceitful villains and vengeful gods, the many faces of Gielinor offer a deep fantasy experience unlike anything else.

A THRIVING WORLD
Visit dozens and dozens of unique and memorable locations, from the Medieval castles of Burthorpe and the tranquil harbours of Catherby, to the dangerous barren expanses of The Wilderness or the tropical reaches of Anachronia.
Own your own port! Run your own farm! Make a pretty penny trading with players at The Grand Exchange and keep your exotic wares safe in the Bank.

SKILLS
With 28 skills to master, what will you become? Will you be one with nature by perfecting your Woodcutting, Fishing, Herblore and Cooking? Or would you prefer to be more creative with Crafting, Farming, Smithing and Construction? Or perhaps your tastes lay elsewhere – with Hunting, Divination, Invention or Runecrafting? Or maybe your soul yearns action, and you’ll take to Magic, Summoning, Slayer and Dungeoneering!

COMBAT
Do you want to get up close and personal with a sharp blade in your hand? Or will you take a tactical approach and attack from range? Or perhaps your skills are more mystical and you prefer the arena of magic?
Fight a dazzling assortment of foes including an unimaginable array of epic bosses. From demons to dragons and rock monsters to serpents, nightmares beyond your wildest imagination lay in wait.