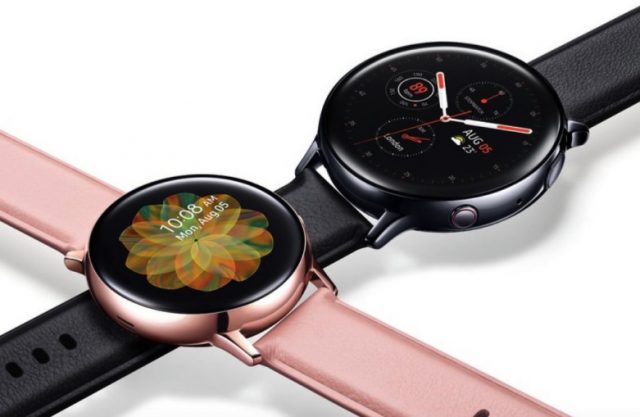 Apple’s latest Watch Series 3 is the most popular smartwatch in the world selling millions of units each month. However, this doesn’t mean that Samsung or any of Apple’s other competitors in the smartwatch industry are ready to give up. In fact, a brand-new leak that comes from Evan Blass reveals to us what Samsung’s next-generation Galaxy Watch 2 is going to look like and that Samsung’s designers have been inspired by Watch Series 3.

The first thing that we want to note about the new Galaxy Watch 2 leak is that since it’s a leak, we are advising everyone to take it all with a grain of salt. Samsung has yet to confirm if the smartwatch shown in the picture above is indeed Galaxy Watch 2 and not just that, but Samsung can simply decide to change the design of the smartwatch before it launches it.

After looking at the new Galaxy Watch 2 for a couple of seconds, everyone can clearly tell that Samsung’s designers for the new smartwatch were inspired by the design that Apple used on Watch Series 3. We are not saying that this is a bad thing by any means because the leaked picture of Galaxy Watch 2 looks amazing. In addition, the metal and glass blend of the design is outstanding!

One of the most interesting things that we can take from this new leak is that the watch face of Galaxy Watch 2 is set to August. As some of you might know, Samsung has a big media press conference planned for August 7th when it’s scheduled to launch the highly anticipated Galaxy Note 10. Therefore, Samsung might be looking to launch Galaxy Watch 2 alongside the new flagship smartphone.