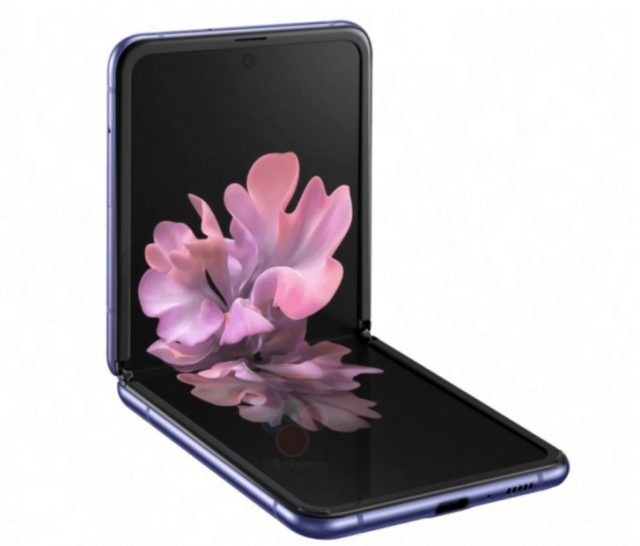 We are only a couple of weeks away from Samsung’s highly anticipated Galaxy Unpacked event and fortunately, we don’t have to wait for one more second in order to get a glimpse at Galaxy Z Flip’s innovative design. The reason why we are saying that is because the smartphone’s official press render has been leaked on the web. The leak comes from WinFuture’s Roland Quandt who is a reputable leakster that has a great track record of predicting Samsung’s every move.

Despite Samsung’s best efforts to keep Galaxy Z Flip away from the media’s eyes until the Galaxy Unpacked event, the official press render of the foldable smartphone has been leaked. The press render is highlighting the innovative design of Galaxy Z Flip that can fold just like a flip flop.

The design feature that stands out the most in the press render is the fact that the display protector is hidden behind the plastic rim. Tech analysts are saying that the reason why Samsung is doing this is because it wants to away the option from users to remove the protector.

According to previous leaks, Galaxy Z Flip will ship with a 6.7-inches display that features a rather impressive aspect ratio of 22:9. Samsung is dubbing the new display design as “Infinity Flex”. Moreover, the display will support Full HD+ with HDR+ technology that delivers an amazing image quality.

The foldable smartphone is going to be powered by Qualcomm’s octa-core Snapdragon 855 CPU. This is one of the most powerful processors available for smartphones in 2020 and it shows us that Galaxy Z Flip will have what it takes to run heavy-duty tasks without a single glitch. In addition, Galaxy Z Flip will be fueled by a 3,300 mAh battery that features quick-charge 15W support.