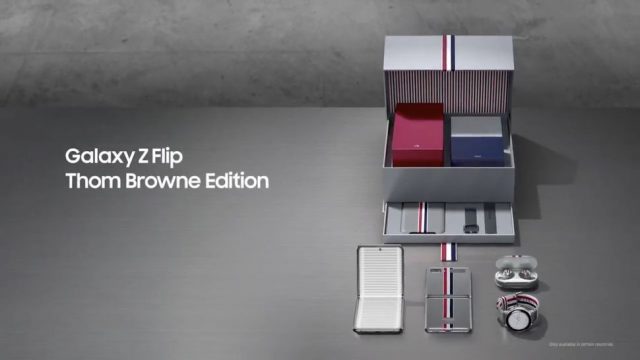 Even though we are only a couple of hours away from Samsung’s Galaxy Unpacked event, we don’t have to wait one second longer in order to get a glimpse of the highly anticipated Galaxy Z Flip in its full glory. The reason why we are saying that is because the foldable smartphone has made a surprise appearance in a brand-new leak. To make things even better, the leak is showing us a special version of Galaxy Z Flip that will be available in a limited number.

As we can see in the featured picture, the special edition of Galaxy Z Flip is named “Browne”. The smartphone’s name is a reference to the American designer Thom Browne. According to the leak, this special edition of Galaxy Z Flip is going to be available with red, white and blue stripes that are running back on the silver design of the foldable smartphone.

We also want to highlight the fact that this special edition of Galaxy Z Flip is going to be bundled with Samsung’s new Galaxy Watch Active 2. To top it all off, the smartwatch is equipped with a special band that sports a similar design.

While the leak might not contain any details about the hardware specs of Galaxy Z Flip, it does confirm to us that the smartphone will sport a clamshell design. This is similar to the one that Motorola’s Razr uses. Another important feature that we want to highlight is the dual-lens camera setup that is mounted on the rear side.

In addition, Galaxy Z Flip will ship with a tiny exterior screen that is located next to the selfie shooter. The screen is going to be used to display important notifications such as missed calls and texts for example.