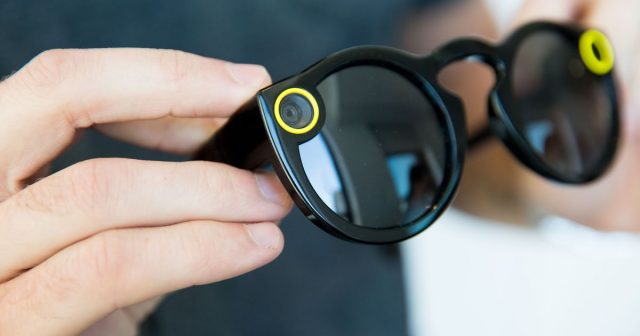 Remember Google Glass? Well, it looks like Snapchat is not ready to give up on the dream of creating glasses that can help people film their lives. Snapchat has been working on a special product called Spectacles for this past couple of years and the company has announced today that Spectacles will launch before 2018 ends and that a pair will be priced at $350.

For those who are unfamiliar with Spectacles, this is not your usual pair of glasses. Spectacles ships with dual cameras mounted on the sides that are targeted towards Snapchat fans who want to film their adventures and post them on the social media platform. Not just that, but Spectacles are the perfect accessory for social media influencers, vloggers and all types of filmmakers who like to share moments from their life.

Spectacles are made from premium materials such as aluminum and the dual-camera setup can use AR (augmented reality) technology. Therefore, Snapchat believes that its new product is worth $350. However, the expensive price tag makes Spectacles quite inaccessible to most Snapchat users and this makes us wonder if Spectacles will have any success on the tech market.

On the other hand, Snapchat says that a pair of Spectacles brings so many cool features that people will be compelled to spend $350 on them. For example, the two cameras that Spectacles feature on both sides can be used to overlay AR lenses and create amazing looking 3D-like photos and film footage. Evan Spiegel who is the CEO of Snapchat said that this is a unique and innovative technology that only Spectacles owners will get access to.

Truth be told, Spectacles are awesome. We can be sure that everyone would love to have a pair and use it during their vacation trips, but we can’t deny the fact that $350 is pretty expensive for a pair of glasses.