We reported earlier today that Puma has announced that it wants to launch its first-ever smartwatch during the IFA Berlin event that takes place this week. However, Puma is not the only company that has something big planned for the event. The reason why we are saying that is because a new internal leak from Sony has revealed that the tech giant is planning to launch the highly anticipated Xperia 5 also at IFA Berlin.

Sony usually does a great job of keeping its upcoming devices away from the media’s eyes and taking the smartphone industry by surprise. Unfortunately for Sony, someone who has access to important memos has decided to leak the fact that Xperia 5 is going to be officially revealed later this week.

Son’s presentation at IFA Berlin is scheduled to take place at noon CET tomorrow and the event will be focused on Xperia 5. The tech giant wanted to test the broadcast and it did a short YouTube live where it made the mistake of showing a glimpse of what Xperia 5 looks like. Someone from the chat managed to get a quick screenshot (posted below). 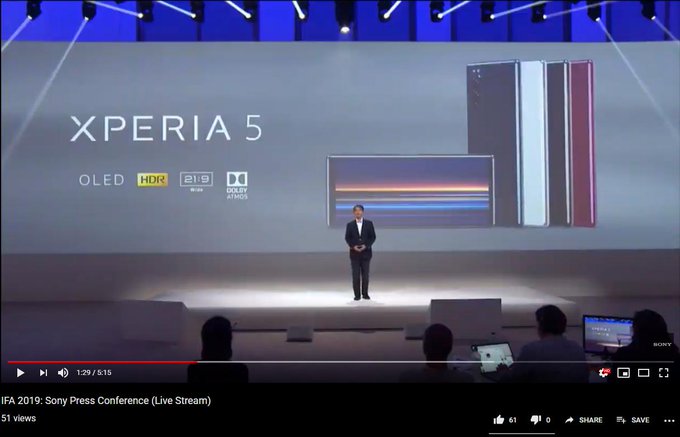 Obviously, we don’t know anything official about what kind of specs or features Xperia 5 will have to offer and this information will be revealed tomorrow. Thanks to previous leaks and what we can tell from the screenshot featured above, we can tell that Xperia 5 will ship with a 21:9 HDR-capable OLED display that is also going to feature Atmos sound.

Xperia 5 is going to be a great smartphone for gaming since it will ship with DualShock 4 support that provides a richer haptics experience when playing PlayStation games. In addition, Sony is going to open the pre-orders for Xperia 5 in Europe starting next week.