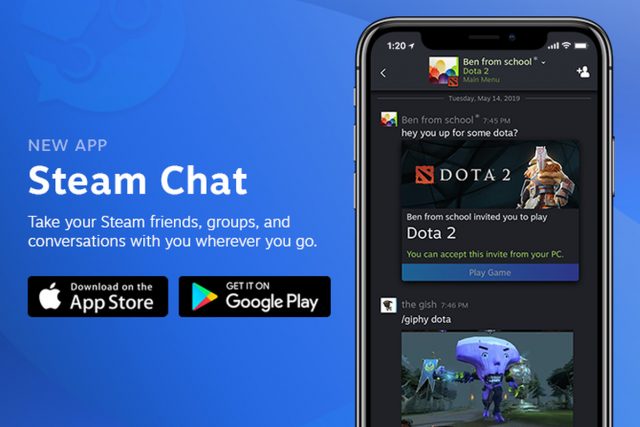 With news of Epic Games trying its best to sign exclusive deals with developers in order to “steal” customers from Steam, this is highly unlikely to happen in the upcoming future. Steam has been around for a long time and PC gamers don’t just like the game library, they are used to it and to the features that it brings such as Steam Chat for example. Steam Chat is an app which offers similar services to Discord and Valve has now launched it for Android and iOS.

Steam Chat offers a plethora of features and they all are designed to make it easier for users to communicate with their friends. As all PC gamers know, online games such as World of Warcraft and CS:GO for example require a high level of coordination from teammates in order to defeat their foes. Valve acknowledges that and it has decided to launch Steam Chat on Android and iOS.

We have to mention that from the looks of it, Steam Chat’s launch on Android and iOS is directly targeted at defeating Discord. Discord is a highly popular communication app that has been steadily growing more popular among the PC gaming community and Valve is looking to dethrone it with Steam Chat.

The last thing that we want to go over is the fact that Steam Chat is not the first app that Valve has launched for Android and iOS this year. Last week Valve launched the highly anticipated Steam Link app which makes it possible for users to stream their AAA PC games on other devices such as smartphones, iPads and so on. iOS users were the last ones to get access to Steam Link because Apple didn’t approve of its services at first.