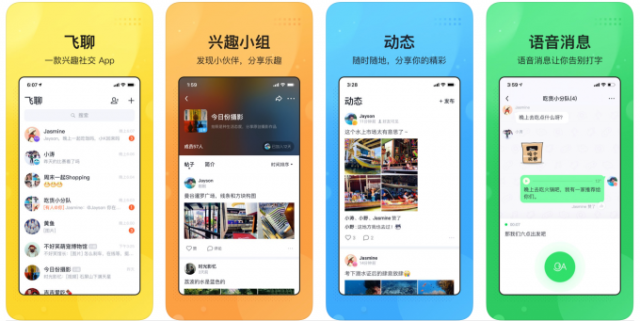 When it comes to social media apps, Facebook is not the ruler in China and instead, everyone uses WeChat. This is a highly popular app and the only other app which can even compete with it is none other than the famous TikTok. This app is created by ByteDance and it is used by hundreds of millions of people worldwide with it’s primary demographic being teenagers. Now, ByteDance has decided to switch its focus from TikTok and launch a new social media app called Feiliao or Flipchat in English.

The new app from ByteDance is something special. It’s a hybrid of an instant messenger and interested-based forums and it is now available on Android and iOS. Multiple reports are showing that Feiliao might have what it takes in order to dethrone WeChat and become China’s favorite chatting and social media app.

Feiliao is described as an “open social product” by ByteDance and it offers lots of cool features. “Feiliao is an interest-based social app. Here you will find the familiar features of chats and video calls. In addition, you will discover new friends and share what’s fun; as well as share your daily life on your feed and interact with close friends,” added ByteDance.

If there is something that we can be sure about, then it has to be the fact that Feiliao is WeChat’s biggest competitor. The proof of this is that WeChat users are not allowed to transfer their profiles or friend connections on Feiliao, thus Feiliao is encouraging users to leave WeChat behind.

On the other hand, Feiliao still has a long way to go before it can be a worthy competitor to WeChat. The reason why we are saying this is because WeChat has a monthly active user base of more than 1.1 billion people.