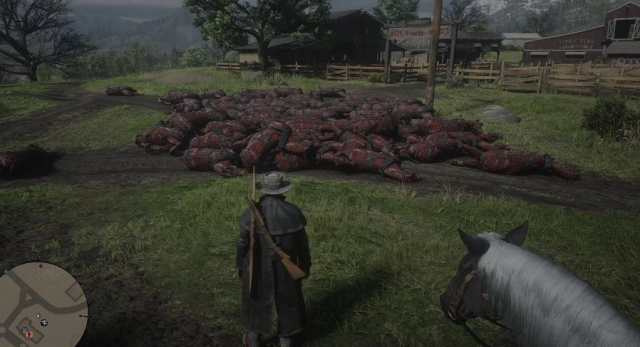 Red Dead Redemption 2 or RDR 2 for short is one of the most amazing games to launch in 2018. The game took eight years to develop and the waiting was all worth it because RDR 2 offers an immersive gameplay experience in the Wild West. Since the game is developed by the same company that is in charge of the GTA franchise, then it should come as no surprise that RDR 2 has also received a special online mode months after it was released.

The online mode is now officially out of beta and the developers have released a new update to celebrate this event and to make the online mode more exciting. Unfortunately, the new update for RDR 2 Online didn’t just come with new features, it also introduced a duplication bug and players are having lots of fun with it.

As everyone can see in the picture featured above, there is a duplication bug in RDR 2 Online that makes it possible for players to exploit the game and clone items. At first, players started duplicating items such as guns and rifles, but they soon found out that the exploit works with the game’s animals.

The Game is Filled by Dead Horses

Players are using the duplication exploit in order to fill RDR 2 Online with dead horses. Yes, you read that right. Everyone who logged in RDR 2 Online during this past couple of days has had to deal with hundreds of dead horse models stacked on top of each other. To make things even worse, the duplication exploit which causes this problem is available on both PlayStation 4 and Xbox One.

The Trolls are Having Fun

Even though this is not the way that the developers envisioned that the launch of RDR 2 Online would go like, we can be sure that trolls are having lots of fun. Not just that, but the developers are surely going to patch the issue via a quick update.