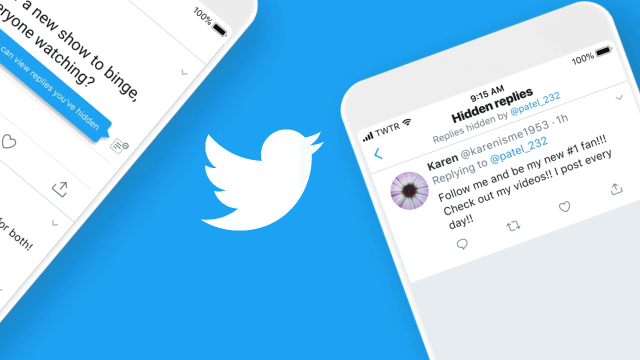 Instagram has removed the likes on posts in some countries and from the looks of it, Twitter has been inspired by this and it decided to make a radical change. Twitter has introduced a new feature called “Hide Replies” and just as its name implies, it is making it possible for users to hide any replies to their tweets that they don’t like.

The new feature is now rolling out globally and not all Twitter fans are happy with it. However, Twitter is not looking at any criticism that it is receiving because it believes that Twitter will help balance conversations on the social media platform.

The developers who are in charge of Twitter have been looking for ways to get rid of the “toxicity” on the social media platform for a long time and now, they believe that being able to hide replies is the solution, or that at least it’s going to make things better.

The interesting thing about the new feature is that it doesn’t delete any replies and instead, it simply hides them when the original poster of the tweet decides to hide them.

A spokesperson for Twitter announced that the ability to hide replies is going to make it easier for users to deal with trolls. However, this is not the only thing that the new feature does.

Many users are utilizing the new feature in order to hide the comments of anyone who is criticizing their opinions. This can be quite problematic since no one is getting “fact-checked” if they make any statements.

Pointing the Attention to Hidden Replies

Another issue that Twitter’s new feature has caused is that it points the attention to hidden replies. After a user hides a reply, then his or her feed will show the following notification “Some replies were hidden by the Tweet author” which just makes the readers more interested in what has been hidden.