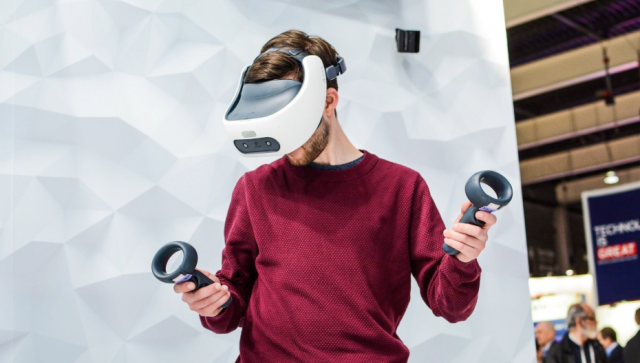 HTC revealed the new VR headset called Vive Focus Plus last month and now, the tech giant has finally decided to announce the official launch date and the price tag for the VR headset. Therefore, Vive Focus Plus will cost $799 and it will launch on April 15th. The new VR headset will ship with fully tracked motion controllers and unlike the standard Vive Focus, the Plus model will not be targeted for gamer audiences and instead it will target business customers.

Vive Focus Plus is Launching On April 15th

HTC has announced that Vive Focus Plus will give users access to the Vive Ecosystem Conference where they can check out 15 different apps. Not only that, but HTC will also throw in a VR game in the bundle such as “Paintball VR” which takes advantage of the haptic vest.

We should note that HTC describes the Vive Ecosystem Conference as a system for enterprise users where they will be able to purchase things from 25 markets that will support 19 languages.

Vive Focus Plus will run on Qualcomm’s octa-core Snapdragon 835 processor and it will offer a pixel resolution of 1440 x 1600 pixels per eye. Vive Focus Plus will also feature built-in cameras for inside-out tracking which remove the need for any external cameras or wires.

The inside-out tracking technology is a great addition to the VR headset because it will make VR experience feel more immersive. Not just that, but the lack of wires being spread all over the living room makes it way easier for users to avoid tripping in them.

Vive Focus Plus can be purchased with a pair of controllers that are also tracked through internal cameras. However, these controllers are quite expensive and they add $599 more to the original price tag.