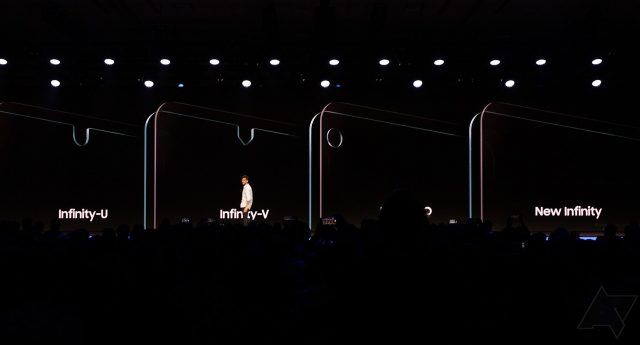 As everyone already knows by now, Samsung and Apple are in a never-ending war. The two tech giants criticize each other at every chance they get and Samsung has been taking advantage of the fact that all of Apple’s new generation iPhones feature a display top-notch. Samsung made of fun of Apple over Twitter, Facebook and all other social media platforms because it decided to use a top-notch which takes up screen real-estate space.

With that said, Samsung shocked the entire world when it announced during its recent developer conference that some of its upcoming smartphones will also feature a top-notch.

If there’s something that everyone knows about Samsung’s smartphones, then it must be the fact that they all use high-end displays that offer a high pixel resolution. Well, it looks like even though Samsung has made fun of Apple for this past couple of months, the South Korean based tech giant is still going to use a top-notch on its Infinity-U and Infinity-V displays (featured above).

Will Galaxy S10 Get a Top-Notch?

The question that all Samsung fan had after seeing the new Infinity displays is if Galaxy S10 will ship with a top-notch? Even though Samsung didn’t want to comment on this, we can be sure that Galaxy S10 will not feature a top-notch.

First off, Galaxy S10 represents Samsung’s flagship smartphone and therefore, it shows off the best technology that Samsung has to offer. Secondly, if Samsung did decide to equip Galaxy S10 with a top-notch, then this would make Samsung look like a hypocrite for making fun of Apple.

Rumor has it that Samsung wants to install the selfie camera beneath the display of Galaxy S10. If this rumor proves to be true, then Galaxy S10 will have a big advantage over all other smartphones available on the market right now.