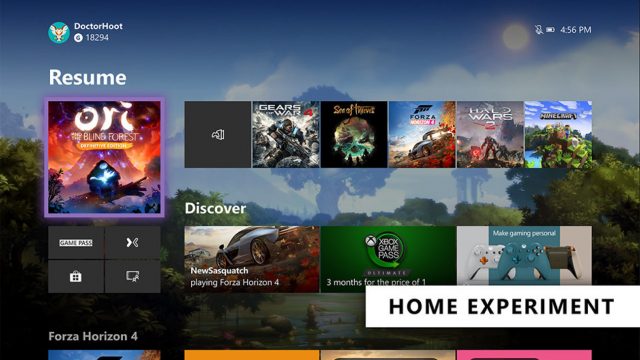 Even though Windows 10 and the Xbox operating systems might not have any problems when it comes to design or performances, this doesn’t mean that Microsoft is not looking for new ways to improve them. We reported yesterday that Microsoft has made a big mistake and leaked how the newly redesigned Start Menu will look like on Windows 10 but now, we have something even better to share with everyone. Microsoft has rolled out a couple of software tests that introduced lots of major changes and a brand-new home screen for Xbox. This is quite surprising since Microsoft’s didn’t announce this design change in any of its previous patch notes. Nonetheless, the new Home panel for Xbox looks great and it’s definitely going to make it easier for users to find their favorite games. New Xbox “Home” Screen As we can see in the picture featured above, the new Home screen for Xbox looks quite different from what we’re used to.  With that said, let’s go ahead and check out what the developers who are in charge of Xbox had to say about the changes made to the Home panel. “The Home on Xbox One is the first thing you see when you turn on your Xbox One, and we want to deliver an easy and seamless experience for you to navigate your console. We’ve heard your feedback and have continued to iterate on Home to get you into your gaming experiences faster and keeping more of your content front and center. With today’s update, we’re experimenting with a streamlined user interface,” stated Microsoft in a new blog post. New Voice Commands The last thing that we want to mention is that the new update for Xbox is also changing how Voice Messages work. All commands are now being moved to a cloud-based assistant instead of an on-console model.