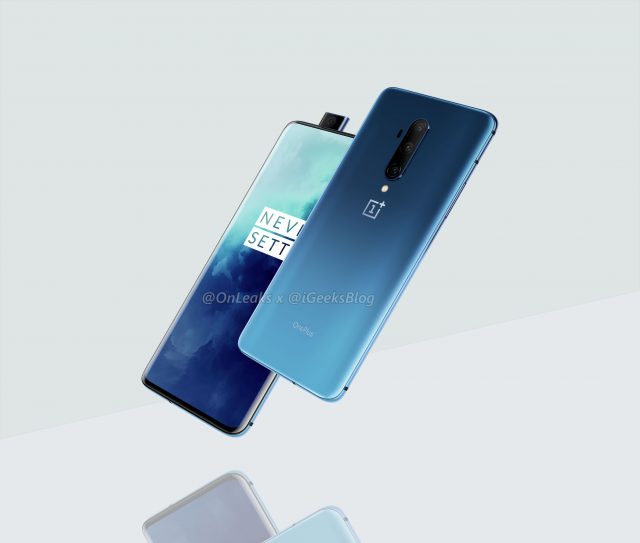 We reported yesterday that OnePlus has signed a deal with Verizon in order to bring its smartphones to the US. Well, it looks like the smartphone that OnePlus is targeting is none other than the highly anticipated OnePlus 7T Pro. The reason why we are saying that is because the leakster known as OnLeaks on Twitter has just posted a new press render of the flagship smartphone. This is leading us to believe that OnePlus is getting ready to start a new advertising campaign for the smartphone.

The leaked press render of OnePlus 7T Pro confirms that the new smartphone is going to ship with a full-screen design and curved edges. Not just that, but the press render also showcases the innovative selfie camera of OnePlus 7T Pro that pops up when users want to take a selfie. In addition, we can spot the triple-camera setup on the rear side of the smartphone.

Since we are talking about OnePlus 7T Pro and its beautiful design, let’s also go ahead and check out which are the highlight specs that the smartphone will have to offer on launch day. First off, OnePlus 7T Pro will be equipped with a 6.65-inches display that uses AMOLED technology and offers a pixel resolution of 1440 x 3100p. Furthermore, the display has a pixel density of 514 PPI (pixels-per-inch) and it is covered in Corning Gorilla Glass 6 for additional protection.

When it comes to power, OnePlus 7T Pro is a beast because it is powered by the latest Snapdragon 855 Plus processor. The processor clocks at 2.96GHz and it is paired with an Adreno 640 (700 MHz) graphics processing unit which ships alongside 8GB of RAM. Last but not least, OnePlus 7T Pro will be available for purchase in the 128GB and 256GB of internal storage space variants.