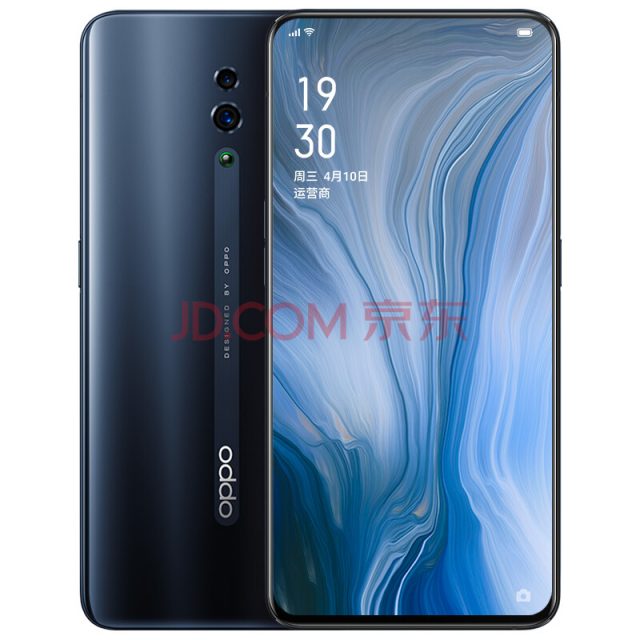 The last time we reported on Oppo Reno was a couple of days ago when the smartphone was spotted running with a Snapdragon 855 CPU under its hood on the GeekBench platform. Now, we have something even better! The smartphone’s official press render has just been leaked and it shows us what Oppo Reno is going to look like in the finished version of its design.

Even though Oppo Reno’s official launch date has yet to be confirmed, we got lucky and the smartphone was listed by a Chinese online retailer. This makes the leak as official as it can be and it also confirms to us that Oppo Reno is going to launch sooner than expected, maybe next even week.

The feature that stands out the most when looking at the leaked press render of Oppo Reno is the smartphone’s full-screen display. This design was introduced by Samsung in February but there is a big difference here.

Oppo Reno’s display doesn’t feature a selfie camera cutout like Galaxy S10 does and instead, the selfie camera is mounted on a slider that comes out whenever it’s triggered.

If there is one thing that we all can agree about when it comes to Oppo Reno, then it has to be the fact that the smartphone features an amazing design which feels premium. Oppo Reno might be the smartphone that the Chinese tech giant needs in order to finally compete at the level of Apple, Google and Samsung.

As previously mentioned, the smartphone was recently spotted on GeekBench. This is how we know that Oppo Reno will be powered by Qualcomm’s octa-core Snapdragon 855 that is paired with 6GB/8GB of RAM. To make things even better, the smartphone’s already powerful CPU is going to ship alongside 128GB/256GB of internal storage space.