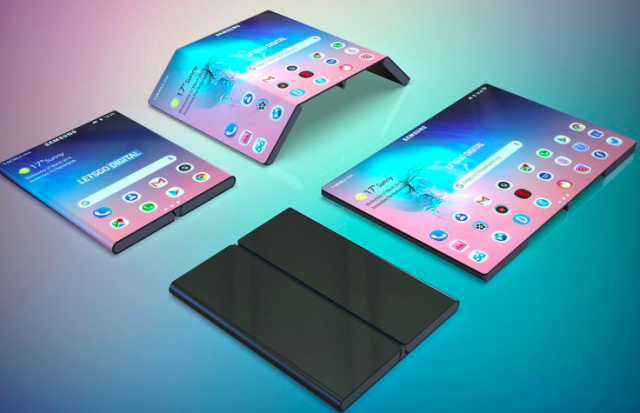 We reported yesterday that Samsung posted a short video of the testing process for its upcoming foldable smartphone in order to clear concerns about the folding display. However, today we have something even better to share with you. A new report from the Dutch publication “LetsGoDigital” is revealing that Samsung is working on a second foldable smartphone that is going to be quite different than Galaxy F.

The smartphone industry is constantly evolving and the perfect example of this is the apparition of the full-screen displays. Apple started this trend back in 2017 with iPhone X and now, all other tech manufacturers including Samsung have followed this trend. Now, tech manufacturers have switched their focus from all-screen displays and they are creating foldable displays with Samsung and Huawei leading the race.

Nonetheless, the pictures presented by the folks at LetsGoDigital show to us that the new smartphone from Samsung is a dual-folding device. This means that unlike Galaxy F, this smartphone’s display folds in multiple ways. The two sides can be unfolded at any times in order to transform the smartphone into a tablet and then back again into a smartphone that can fit into the pocket.

If we take a look at previously leaked patent drawings from Samsung we are going to see that the South Korean based tech sticks true to them. With that said, there is a high chance that the next-gen dual folding smartphone is going to look just like the picture featured above shows us.

However, the new folding smartphone seems to be in the development phase and this means that we are going to need to wait at least until next year until we see an official announcement from Samsung.