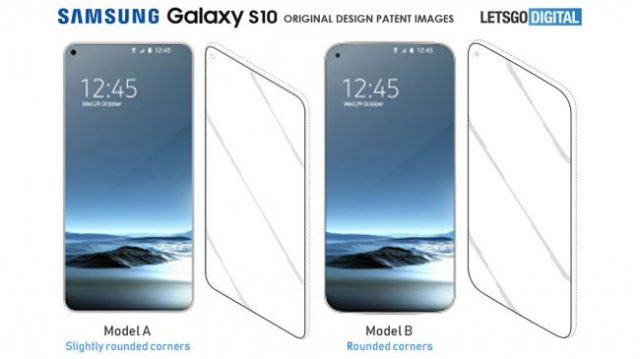 Galaxy S10 is the world’s most highly anticipated smartphone and therefore, no one should be surprised to find out that leaksters are keeping a close eye on every piece of information related to Galaxy S10 that pop up on the web. Usually, leaksters manage to get their hands on press renders of upcoming smartphones, but this time, something better has surfaced on the web.

Samsung has patented the design for Galaxy S10 and the picture featured above gives us a glimpse of how the next-generation smartphone is going to look like. Instead of going with a display top-notch like everyone expected, Samsung decided to do something innovative and use a special “Infinity-O” display that features a small cutout for the selfie camera.

The most important thing that we can take from this latest leak is that Samsung is showing everyone that there is a way to design full-screen smartphones without having to use a top-notch. To make things even better, Samsung is basically throwing a jab towards Apple who is its biggest competitor and also the first company to use a top-notch.

Samsung has said for a long time that the ideal smartphone needs to look like a slim sheet of glass. No one believed that Samsung can achieve this goal because it sounds way too futuristic, but it looks like Galaxy S10 might be the smartphone that Samsung was always talking about.

If Samsung does manage to create a handheld device that looks as cool as the one featured in the picture above, then we think it’s safe to say that all other tech companies are going have a difficult time competing against Samsung. Galaxy S10 will look just like a device taken from a Sci-Fi movie such as Star Trek or Star Wars.