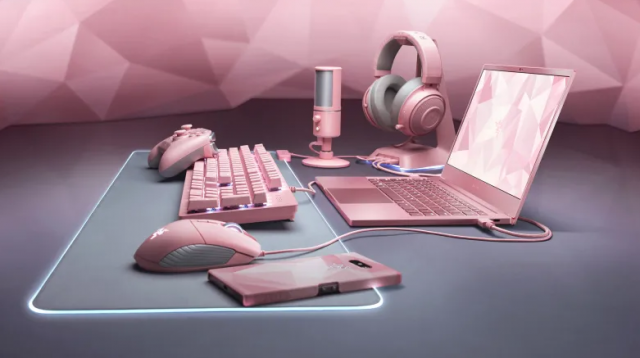 Razer is one of the world’s most popular companies when it comes to gaming devices and accessories. Razer understood right from the start that gaming accessories should be marketed both to men and women and this is why Razer has managed to get such a massive fan following while other companies which offer similar products and target them to a male audience are failing. The perfect example of this is how Razer has announced today that its going to release its first all-pink laptop.

With Valentine’s Day just around the corner, Razer knows that there isn’t a better gift that someone can get other than a gaming laptop. Therefore, the company has announced a new Quartz Pink version of the Stealth Blade laptop that ships with a range of other pink accessories.

While the bundle of pink accessories might be look amazing, the most impressive thing about this offering from Razer is the Blade Stealth 13 gaming laptop. The laptop is equipped with an NVIDIA GeForce MX150 (25W 4GB GDDR5RAM) graphics card that ships alongside a quad-core Intel Core-i7 processor which can boost its speed in turbo mode up to 4.6GHz.

Razer Stealth 13 is equipped with 512GB of base SSD internal storage space and it can be expanded with PCle SSD. To make things even better, the gaming laptop also features a whopping amount of 16GB RAM.

Since we are talking about Blade Stealth 13, we have to note that one of the laptop’s most important features is its 13-inches full HD matte display that is individually calibrated to offer 100% sRGB color saturation.