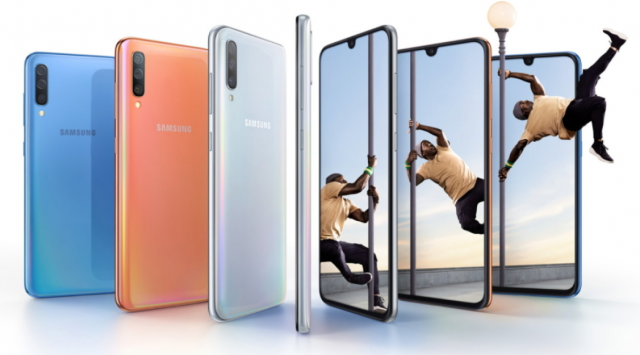 If there is one thing that we all can agree when it comes to Samsung, then it has to be the fact that the South Korean based tech giant loves to flood the smartphone industry with new devices every year. Unlike Apple and Google who focus only on high-end smartphones, Samsung also launches entry-level and mid-range devices. With that said, the latest smartphone from Samsung is called Galaxy A70 and it was announced today.

First off, we want to mention that we reported yesterday on a TENAA leak that revealed the highlight specs of Galaxy A70 and Galaxy A60. Well, it looks like the TENAA leak was accurate since Galaxy A70 will indeed launch with a massive 6.7-inches display that uses Super AMOLED technology.

The display features a 20:9 aspect ratio and a 1080 x 2400 pixel resolution. To top it all off, the display uses the sleek looking Infinity-U design.

Even though Galaxy A70 will fit in the mid-range category, the smartphone is still going to ship with impressive hardware specs and the 32MP f/1.7 rear mounted camera which also features a wide-angle camera and depth sensor is the perfect example of that. The smartphone also ships with a 32MP f/1.7 selfie shooter that is much better than the previous Galaxy A70 model which features a 24MP selfie shooter.

If we take a look under the hood of Galaxy A70, we are going to see that the smartphone is fueled by a 4,500 mAh battery which supports 25W fast charging. In addition, the smartphone is equipped with an octa-core processor that is paired with 6GB/8GB of RAM and 128GB of internal storage space.

Samsung didn’t want to announce the price tag of Galaxy A70 and the only thing the South Korean based tech giant said is that we will find out more on April 10th when Galaxy A70 is scheduled to launch.