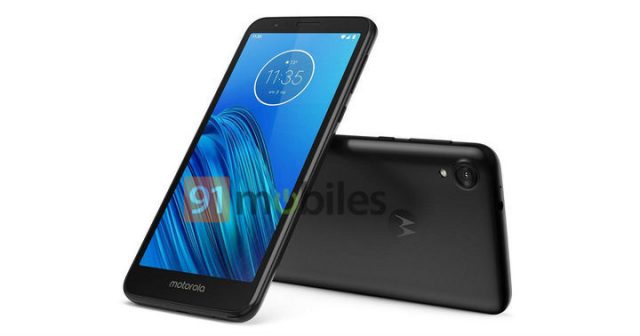 Even though Motorola might not release any smartphone that can “steal” the spotlight away from the likes of iPhone XS and Galaxy S10, Motorola is dominating the mid-range market. Motorola keeps launching affordable smartphones that are equipped with reliable hardware specs and this is why Motorola’s mid-range devices are selling so well.

Nonetheless, the reason why Motorola is making headlines today is because one of its upcoming smartphones has just been leaked. The leak first surfaced on 91mobiles and today we are going to take a closer look at everything there is to know about the upcoming smartphone starting with design and ending with specs.

The next smartphone from Motorola is called Moto E6 and the folks at 91mobiles have managed to get their hands on a press render of it, despite the smartphone’s official launch date not being announced yet.

The press render shows us that the new Moto E6 will not feature that camera “hump” that Motorola’s smartphones have been featuring during this past couple of years. This is a step in the right direction from Motorola in terms of design.

Moto E6 is also going to ship with a single rear camera that is placed in the top-right corner alongside with a LED flash that is located beneath the bezel. From the looks of it, the display bezels of Moto E6 are a bit thicker than the ones used on Moto E5.

Even though Moto E6 has yet to be announced, the smartphone has made appearances in previous leaks where we found out that it is going to be powered by a Snapdragon 430 SoC. Not just that, but the chipset will also ship alongside 2GB of RAM and 16GB/32GB of expandable internal storage space. The display will measure in at 5.45-inches and it will use HD+ technology.