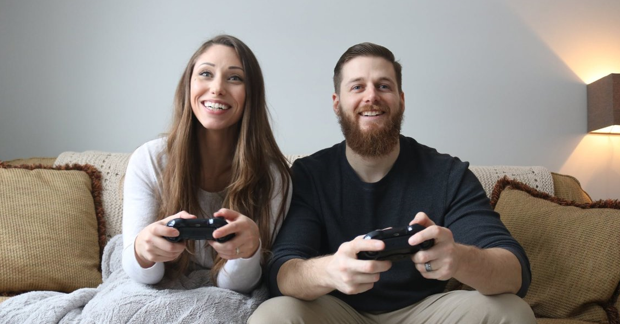 There are lots of different ways to spend your time with a person you love. That can be a trip to a restaurant, a hike in the woods, or a romantic dinner. But it should not always be this complex; you may just play some videogames together. The simplest way to do so is to just whip out your smartphone, press a few buttons, and you are ready to go. Sounds cheap, but it will give you both tons of fun. Thus, here is our list of the top 10 mobile games for couples and friends.

A fast, competitive arcade game where players, controlling various vehicles, have to smash each other’s heads off. You can hit an opponent, throw them off the track, turn them over, push them onto a saw, and so on. You can choose from a variety of different machines and unusual closed locations with dangerous obstacles.

This is high-quality three-dimensional chess where the angle of view changes with every next step in the game. That puts the players in absolutely equal conditions, regardless of the turn sequence. There are several types of boards and various color and pattern options.

It’s an atmospheric sidescroller which is quite great when playing together (from 2 to 4 players). All players have a screen area that they can control. The coop’s mechanics are the same as in the single player, but there are only 30 levels.

It’s one of the few games about football that looks beautiful and has a large number of features. In Foosball Cup World, you can play alone; it’s quite interesting because there is a lot of variety in it (after all, there are different modes and lots of customization). You can also play with other people. Choose the most famous football teams in the world. The AI is quite great as well – you cannot easily outplay it.

If you don’t have a partner to play this game with, then be sure to check out this site that will allow you to meet Russian girls for marriage online.

And here is another set of mini-games that delivers no worse than other games of this list. Management and rules are as easy to understand as in Micro Battles: the only difference is that in Finger Fights, you don’t see your characters or anything like that since the protagonists are your own fingers. The description still states that there are three games in the collection, but there seem to be more than five of them there. In any case, for a couple of hours, you can sit down, delays.

This game is much more intense than the games I have mentioned above: two jet planes are fighting in the air, shooting rockets at each other and trying not to crash the planes into anything. The graphics are quite great, and the controls are very intuitive. The game is quite a competitive experience; it is very challenging. It is one of our personal favorites on the list.

It’s the simplest “one-finger” game on the market where you and your opponents control funny tenors. Each of them automatically spins in place, and when you click on the screen, they move forward. The main task is to hold on for as long as possible under the light of a single searchlight and not be thrown off the stage.

Be sure to check out this list of the best Android games by AndroidCentral.

Oh, we love the twister, but arranging a game of twister is quite hard; it’s bulky and requires lots of space and more than two people. Fingle will help you – it’s the same twister but has to be played with your fingers. It is no less simple and exciting fun; however, the developers claim that the game was created only for two people who want to plunge the players into a warm and even intimate atmosphere. Fingle’s music is perfect for this. It is up to you to decide with whom and with what intentions to play it, but it’s definitely worth a try.

You probably know Soccer Physics – this is a simple game about four football players (2 from each team) who play football on a very small pitch. They only move by jumping, and this game looks very hilarious. Pocket Soccer is pretty much the same in most aspects.

The last but certainly not least is Wrestle Jump. It is very similar to Tug the Table, only this time, you play as wrestlers who still strive to overturn their opponent face first in the dirt. This sums up the game, and again, as with many other games on this list, there is only one button involved.